I know the blogs have been a bit thin on the ground lately, but now that I'm back on the chain gang again it’s hard to find the time to put pen to paper. I’m not exactly setting a good example for the writing group that I run (although that’s turning into a kind of discussion group where basically we drink wine and put the world to rights, but it’s highly enjoyable all the same). Trying to juggle a budding social life, maintaining the house and Mark’s lunchbox to his exacting standards and keeping up my "Essex Girl" tan&#8211; as well as holding down a responsible role flying miners in and out of places I can’t even pronounce &#8211; is no mean feat I discovered.

I have to say, I’m really enjoying my gainful employment. My training went well, and I’m now almost an expert on the 3-letter airport codes for most of the remote mining towns like Paraburdoo, Karratha and Meekathara. Mind you, they seem to have 3 letter acronyms for almost everything these days &#8211; us BTAs (business travel advisors) get monitored on our GCE “great call experience” at our PDPs (personal development plan meetings) &#8211; the list is endless. People can’t seem to be bothered to speak in long hand any more &#8211; WTF! I’m also becoming an expert on mine-equipped hire vehicles and can now tell you the difference between a dual cab wagon and a single cab flat bed tray top (not sure how useful this will be if I ever come back to work in London though). I’ve now moved over to servicing the Singapore account and have been flying employees out to exotic locations in South America, Guinea, Mozambique and Mongolia (I wonder if Thrifty’s Ulun Bator branch supply mine-equipped yaks?).

We had a visit by the agent from Cathay Pacific last week, and trying to make a good impression I enquired if she had any new “routes” planned. I’d obviously forgotten that the English pronunciation of “routes” means something quite different in Australian *, so I don’t think I’ll be getting any free flights to Hong Kong in the near future.

* Root (verb and noun) : synonym for f*ck in nearly all its senses: "I feel rooted"; "this washing machine is rooted"; "(s)he's a good root". A very useful word in fairly polite company.

Our offices are slap bang in the middle of the CBD (see, I’m getting into the terminology) so I can pop out in my lunch break for a bit of window shopping although I still can’t afford to buy anything. It is rather nice being able to wander over the road to lovely Stirling Gardens in my lunchtime to sit in the sunshine and eat my tucker amongst the concrete kangaroos knowing that it’ll be warm and sunny. I have even explored the interesting Old Court House (the oldest surviving building in Perth) and was shocked to discover that they only abolished the death penalty here in 1984! I suddenly felt grateful that I’ve only got a speeding ticket so far. Even the hour long commute to work on the bus is quite pleasant (and usually quite entertaining as it appears that only eccentric pensioners, high as a kite aboriginals and British ex-pats utilize public transport outside of the CBD &#8211; and I almost qualify for 2 of those!). So a bit of change from the Liverpool Street line. I’m kept entertained every evening waiting at the bus stop by the amazing light show projected from the council offices opposite (see pic).

The autumn has now set in, although it was a long time coming. The past few months have been very...well Spring like! The nights have been drawing in and it did seem weird getting home in the dark at 6.30pm when it was still warm enough to sit outside in a bikini! I felt like I should be walking back from the bus stop horizontal against the freezing wind, to a warm cup of cocoa instead of rushing home to put the air con on.

We’ve been to a couple of lovely open air concerts including The Freo Blues and Roots Festival, where we were volunteers. It was fun, but as we were stuck on the gate putting on wristbands for much of the day, I had to keep skiving off to watch the bands I really wanted to see! That will teach me to be so tight-fisted and not actually pay for a ticket! But it was rather lovely watching Steve Earle and Crosby Stills and Nash with the sun going down &#8211; and not a drop of mud in sight. If only Glastonbury could be transposed to Perth &#8211; I’d go every year.

In Perth there seems to be dozens of open air cinemas which spring up in the most unlikely places in the Summer/Autumn. The one we went to was on the roof of a multi storey car park and it was quite surreal sitting in deck chairs, watching “Dr Strangelove” with the city lights in the background.

It is now however getting a bit nippy in the mornings and evenings (we had our coldest May temperature for 90 years this week) and I’ve had to dig my winter woolies out of the suitcase. They’d have to dig me up before you’d ever catch me in Ugg boots though.

My vegetable plot is also suffering from the turn of temperature &#8211; my water melons are disappointingly small (the bane of my life!), my peppers/capsicums are more like chillies and my leeks are only about the size of spring onions. The only thing that seems to thrive, are cherry tomatoes, and they spread through the garden like weeds. The soil is almost pure sand and while it makes weeding very easy, you have to add loads of manure to it (no shortage of B*** Sh** here thankfully!). I’m beginning to realise why fruit and veg are so expensive in WA. Oh how I miss Sainsbury’s &#8211; that Nectar card is burning a hole in my pocket.

It seems an odd thing to be looking forward to, but a shopping spree is top of my list of things to do when I get back in the Summer. After catching up with friends and family of course! Dan and Joe both finish their degrees this year and Dan’s job hunting finally paid off when he was offered a great job for an American Engineering firm based in Reading, which he starts in September.

Joe is enjoying the high life, now he’s rubbing shoulders with the rich and famous and in with the “Film and media” set. He’s just won tickets to see Lady Gaga at Twickenham for having the best photo on Twitter of himself and Russell Tovey the actor He even got to hand a glass of champagne to the lovely French actress Catherine Deneuve the other week and received an award at Uni from renowned writer Hanif Kureishi (My Beautiful Launderette, Buddha of Suburbia). He’ll go far that boy! I miss them both like hell and can’t wait to see them again after 12 long months. Will have a lot of mother/son bonding to do &#8211; so have started saving up now.

They managed to forget both Mother’s Days (celebrated in May here, March in the UK) &#8211; but all the “mums” in the family were treated to a lovely lunch at Mark’s sister’s. We were even joined at the table by their pet sheep (thankfully she wasn’t serving lamb) &#8211; not something you see every day!

So until July, when I’ll be “zipping up my (Ugg) boots, and going back to my roots” for some warm weather (ever hopeful), warm beer and hopefully a warm welcome from kith and kin (and maybe even some gold medals?), it’s “Gooday” from this jillaroo. 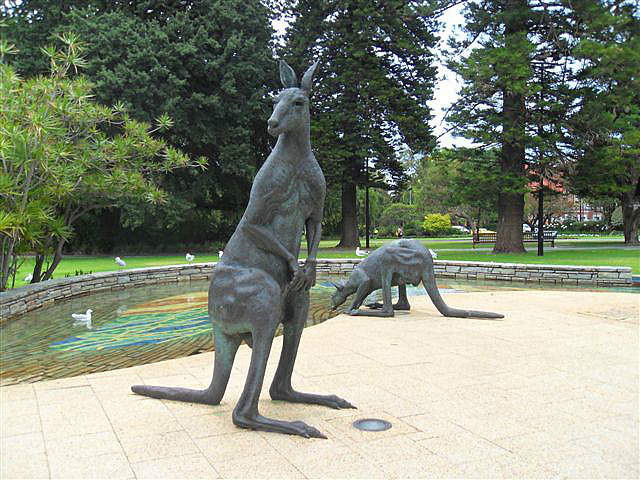 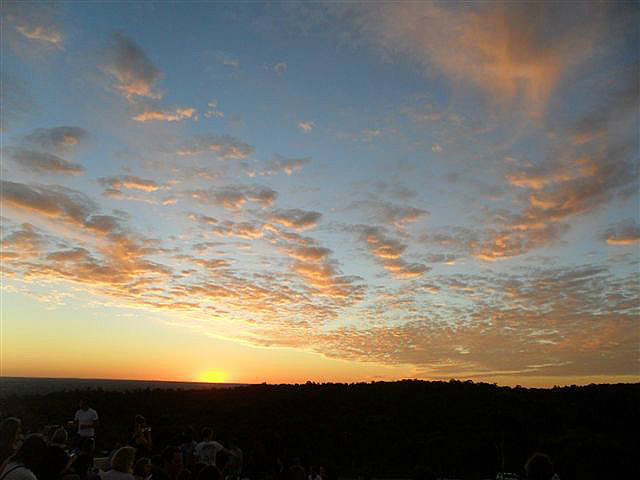 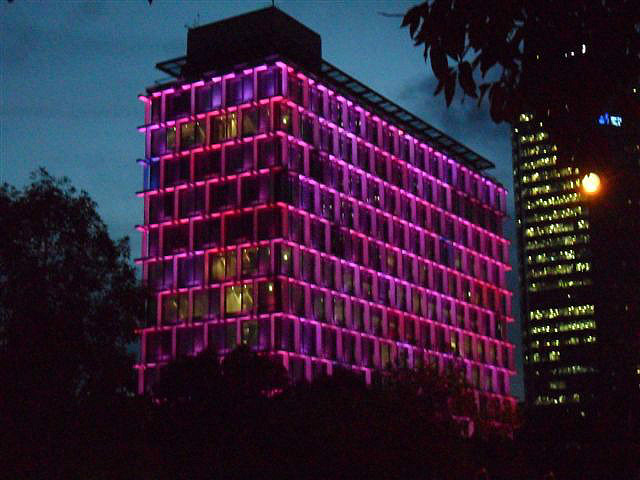 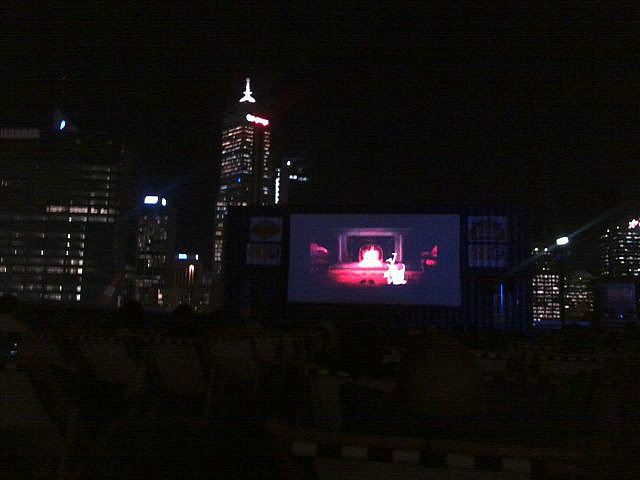 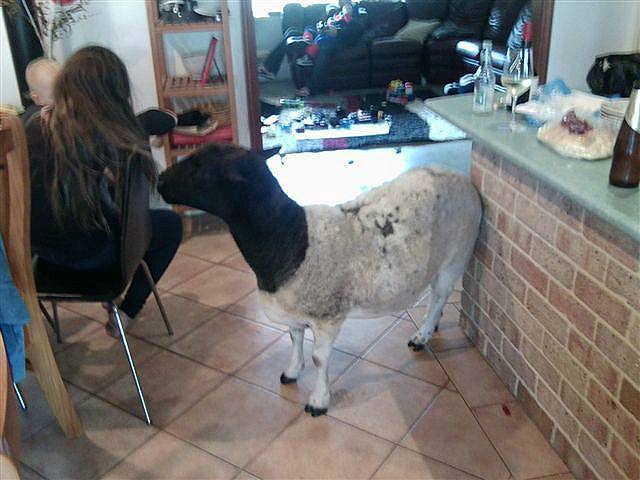 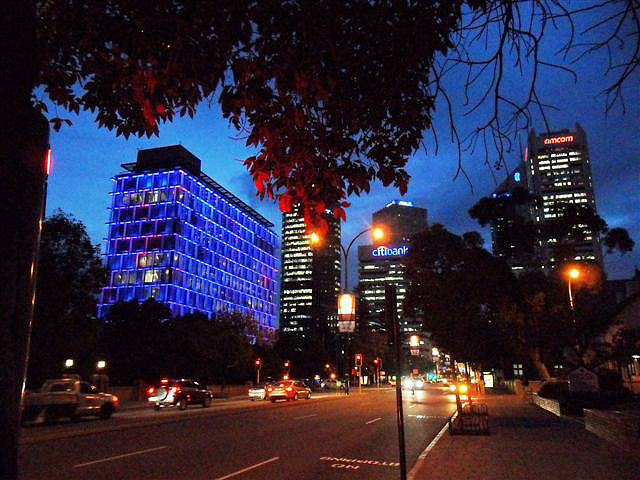 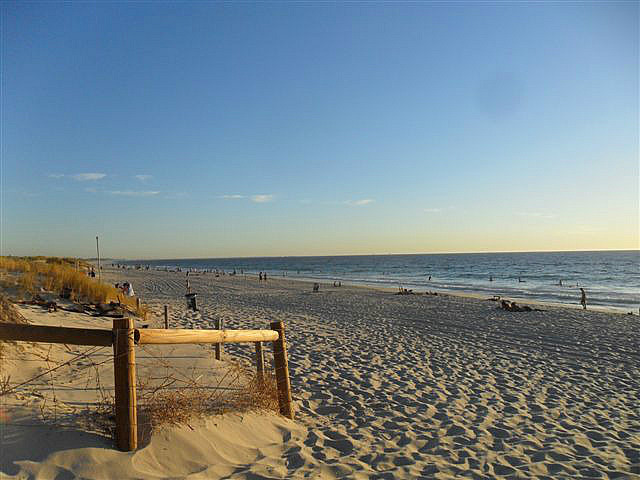 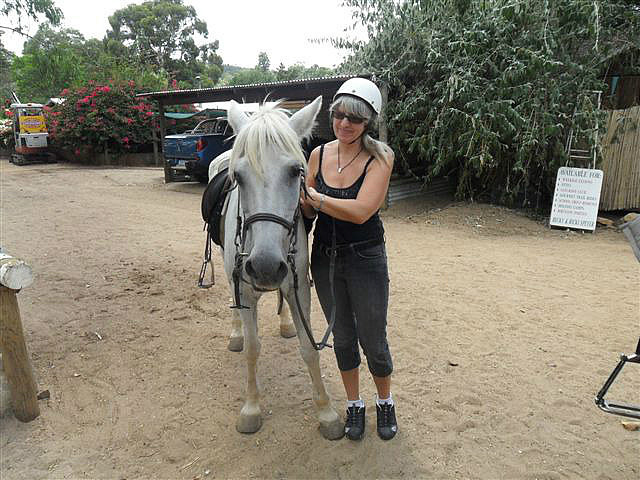 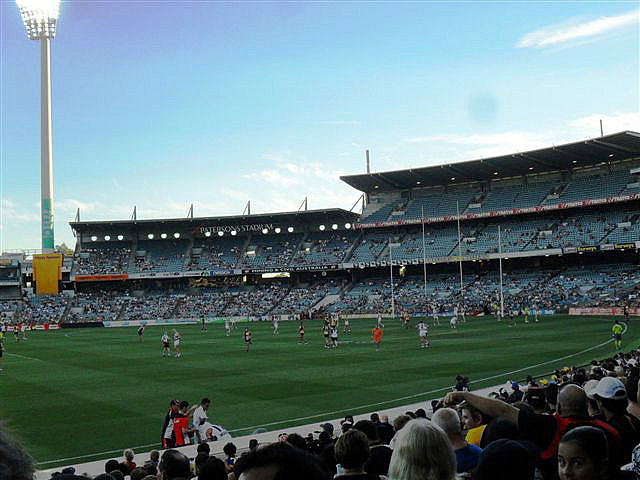 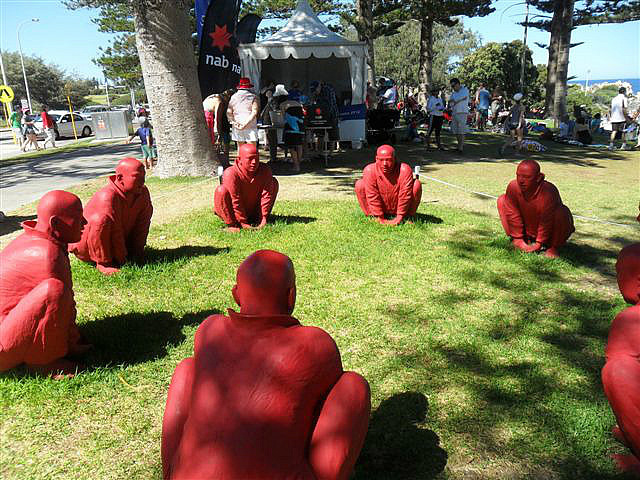 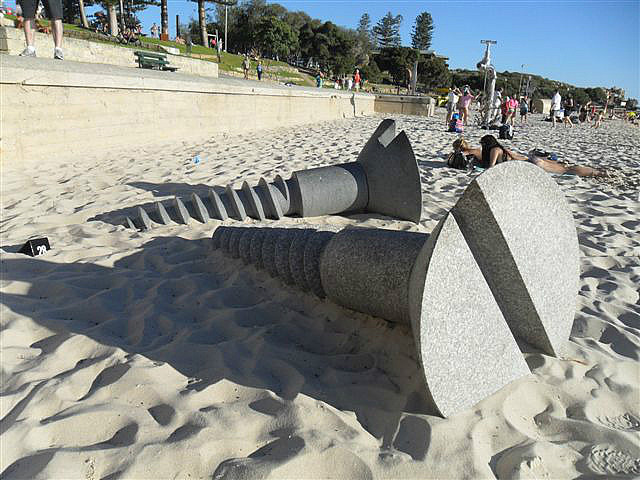 A screw on the beach 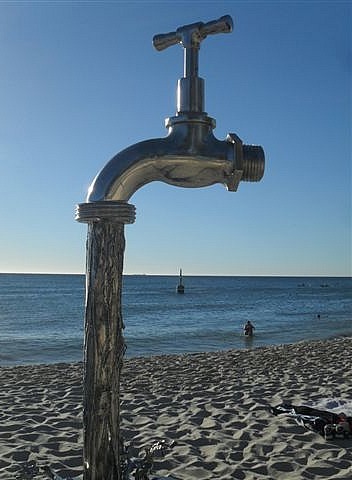 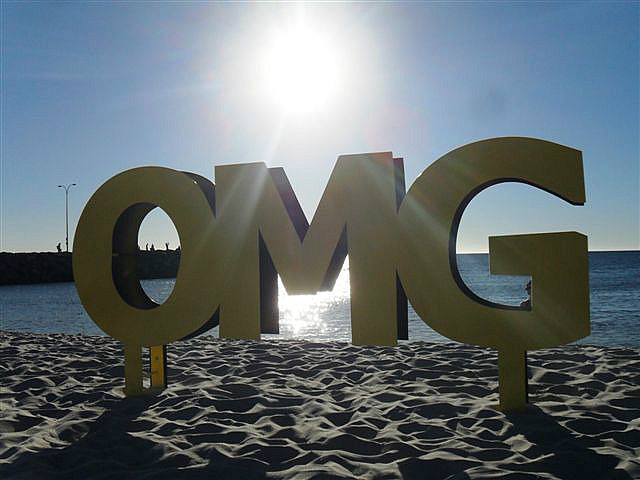 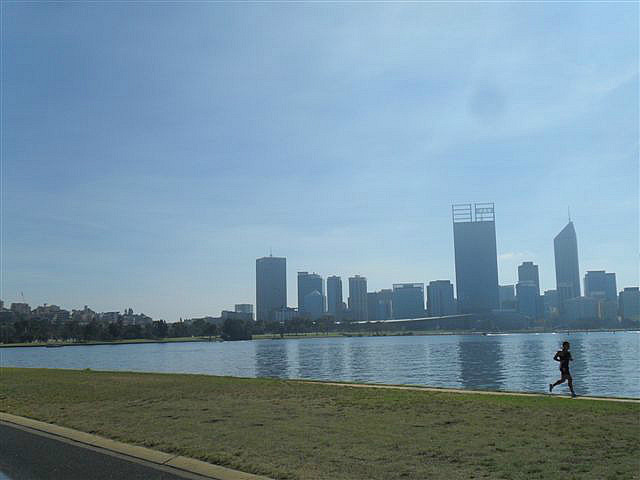 Cycling Along the Swan River 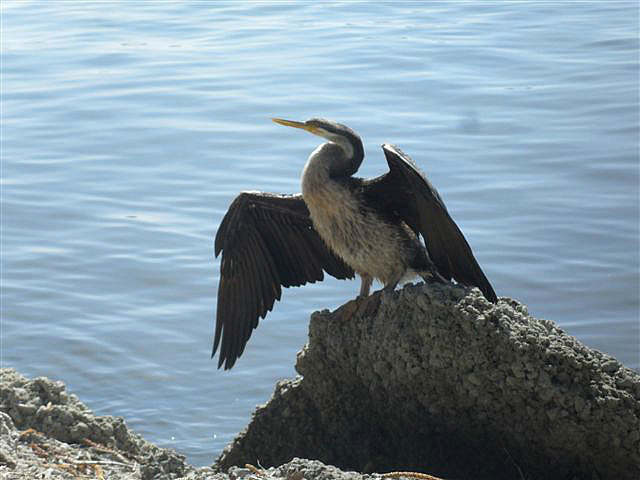 Egret on the banks of the Swan 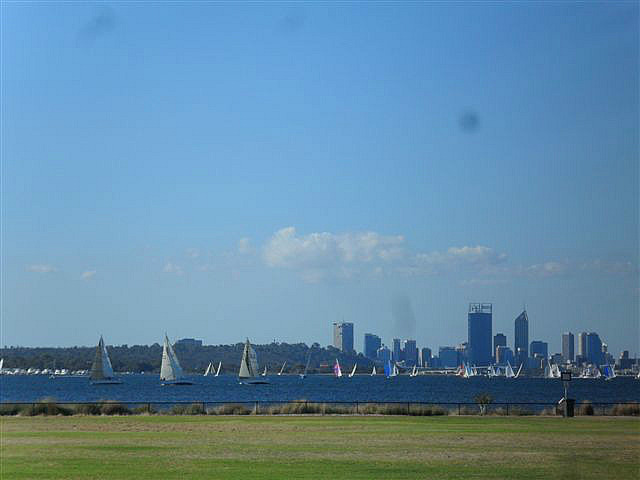 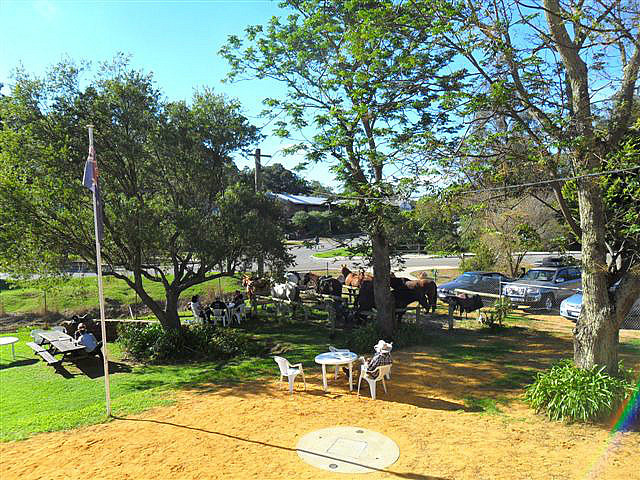 Sunday Lunch at the OK Coral

Posted by kathystravels 16:00 Archived in Australia

This blog requires you to be a logged in member of Travellerspoint to place comments.

If you aren't a member of Travellerspoint yet, you can join for free.